Albert Camus was a French philosopher, writer, and journalist. The ideas in his essay The Myth of Sisyphus contributed to the rise of the philosophy known as absurdism. He won the Nobel Prize in Literature in 1957 “for his important literary production, which was clear-sighted earnestness illuminates the problems of the human conscience in our times”.a During the Second World War, Camus joined the French Resistance cell Combat, which worked against the Nazis. He was the editor of the group‘s underground newspaper under the nom de guerre Beauchard.

Jacques Lucien Monod was a French biochemist who won the Nobel Prize in Physiology or Medicine in 1965, together with Francois Jacob and Andre Lwoff “for their discoveries concerning genetic control of enzyme and virus synthesis”.b He is best known for his essay Chance and Necessity, in which he expounds on his thesis that all existence is only the result of natural processes by “pure chance”. During the World War II, Monod was active in the French Resistance eventually becoming the chief of staff of the French Forces of the Interior.

Both Frenchmen were Nobel Prize winners and were committed members of the World War II resistance. But they shared something deeper.

According to Brave Genius: A Scientist, a Philosopher, and Their Daring Adventures from the French Resistance to the Nobel Prize, a book by Sean B. Carrol, the two men shared a deep friendship. Carrol describes Monod as one of Camus’ few constant and sincere friends, right in the epilogue of his book. The deep friendship is further illustrated with Camus’ claim that “I have only known one true genius: Jacques Monod.”  Monod, in turn, repaid the compliment by using a line from Camus’ ‘Myth of Sisyphus’ as an epigraph of his bestselling work, ‘Chance and Necessity: An Essay on the Natural Philosophy of Modern Biology”.

Carrol’s book sheds light not only on the friendship of the two men, but on the deeper parallels on the two men’s work. Carrol’s well-researched work adeptly mixes science, philosophy, literature, history, and biography into a fascinating story of the transformation of ordinary lives into exceptional lives by extraordinary events.

>>> Brave Genius is available in eBook format and is on sale at Amazon for a limited time. Get it now →click here. 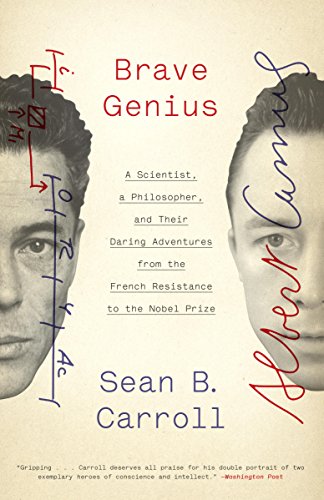 >>> Get Monod’s Chance and Necessity here .

One thought on “What do Albert Camus and Jacques Monod Have in Common?”