A professional house renovator, a common garden snail, a coastal town on the North Sea coast of England. They all have something in common.

Patricia Amble is the lead character in Nicole Young’s mystery book series. The books’ heroine is a professional house renovator trying to leave a difficult past. She buys old houses, renovates them, and sells them for a neat profit. She attempts to perform a renovation on her heart as well, as she entertains persistent attentions from handsome men vying for her affections, but mysteries and dark secrets from her past come back to haunt her. She desperately struggles to outrun them, hastily moving from town to town, but they soon catch up with her, and all her plans of living a normal life go violently awry.

The Patricia Amble mystery series consists of three books: Love Me If You Must, Kill Me If You Can, and Kiss Me If You Dare. 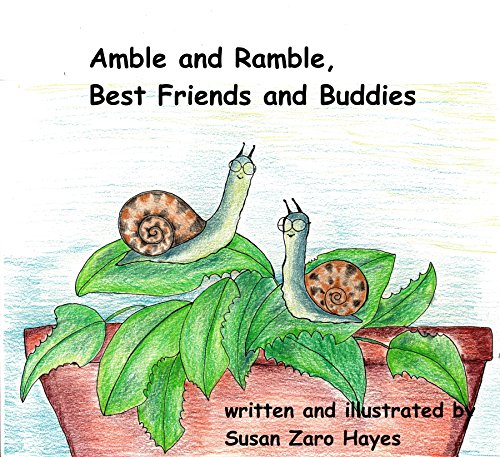 Amble and Ramble are two garden snails. They are characters in a children’s book Amble and Ramble, Best Friends and Buddies written by Susan Zaro Hayes. In the book, the two snails who are also best friends wander through a garden, munching on all types of green leaves, and meeting all sorts of friends. Together they set out for an exciting adventure! The book is written for children ages three to eight years old. It is published as a Kindle eBook.

Amble is a small town and seaport on the North Sea coast of Northumberland, England. The town hosts a few notable buildings, including St Cuthbert, originally constructed in 1870 and expanded in 1929, and its associated vicarage built in 1876.

In 1934, when the RMS Mauretania was heading on her last voyage to the shipbreaker’s yard at Rosyth, the town council of Amble sent a telegram to the ship saying “still the finest ship on the seas”. The Mauretania replied with greetings “to the last and kindliest port in England”.

A professional house renovator, a common garden snail, a coastal town on the North Sea coast of England. They are all named Amble.

Love Me If You Must
Click Here to Preview

Kill Me If You Can
Click Here to Preview

Kiss Me If You Dare
Click Here to Preview

Amble: The Friendliest Port. A Pictorial History of Amble, Northumberland